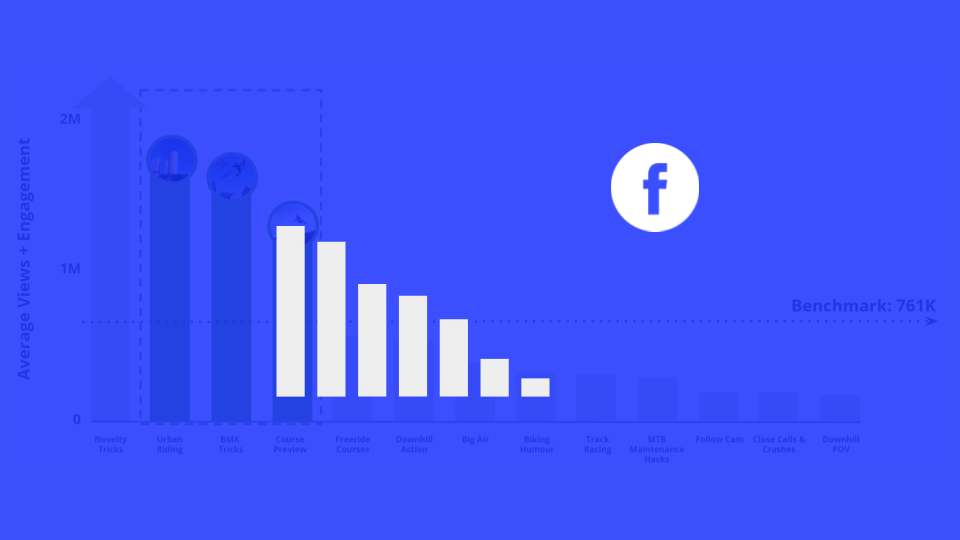 This category features riders performing jaw dropping tricks in front of an audience. Top performing videos featured a single trick and were filmed on a smartphone.

Content Opportunities: Consider location and context for stunt videos. Performing a stunt in a situation that hasn’t been used before or is out of the ordinary can add originality and generate intrigue from viewers.

Taking to The Streets. Riders swap dirt for concrete and get creative on their bikes in urban environments and public spaces.

Getting The Lay of The Land: Mountain bikers pre-ride courses before a race and describe the the trail and it’s features along the way.

Outliers: These videos were omitted from their content buckets as ‘viral’ outliers for exceeding 3x the views and engagements of their respective benchmarks.

Multi Angle: Rider and jumps are shown from multiple angles to represent the scale of the jump.

Slow Motion: The video is repeated in slow motion, catching the rider’s take off, air time and landing.

Content: PinkBike shared this teaser for a short film from Patagonia and linked back to their site where they hosted the full length version. Video highlights trails and riders familiar to PinkBike’s core audience.

Style: Video is filmed on a smartphone and features a man riding the worlds smallest bike. It uses original audio and the live audience laughter adds to its humour.

Content: Compilation style content from PinkBike. Videos in this category are from their weekly series, Sunday Saves and Friday Fails.

Audio: Raw audio captures the high speed of the run and rider’s reactions.

Content: A professional mountain biker is highlighted in POV footage from the rider behind him during a downhill run.

Content: Follow cam style footage from professional riders provides a detailed look at the course used for freeride MTB event, Darkfest. This video was posted just after the multi day event started and allowed followers to familiarize themselves with the course.

Caption: Details on the winners are provided as well as a link to the full race.
Split Video: Video features the finish of both the mens and womens gold medal race.

Dynamic Filming: Riders are shown from various perspectives from start to finish with ideal angles for each section of the track.
Caption: Winners of all the event’s final races are named and tagged in the caption and a link to the full results is provided.

Time Lapsed: Details and progress are shown in fast paced format with several clips slowed down to original speed for more emphasis.

Viral: This clip was originally posted by the rider on instagram before it was shared by brands and creators across other platforms. Those that tagged the rider saw higher levels of engagement