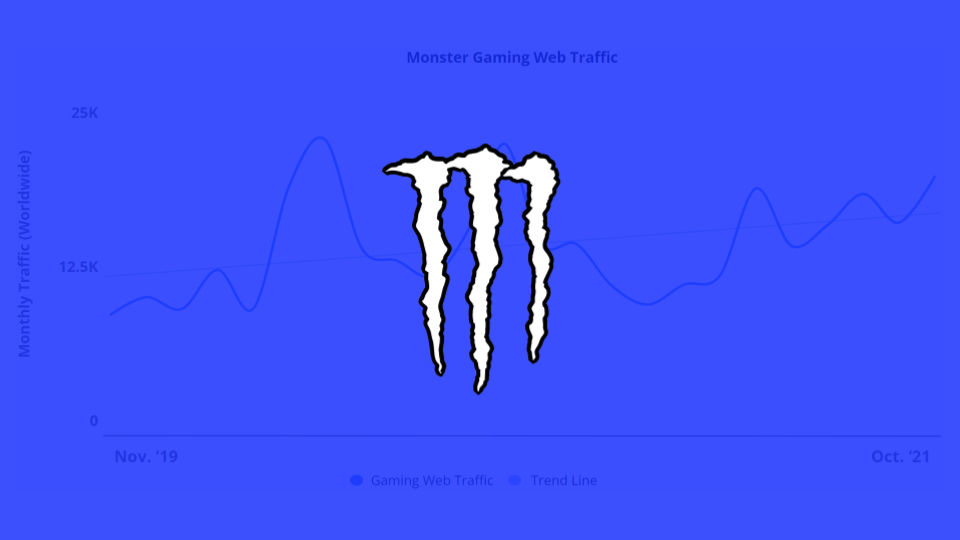 Monster has positioned itself as a leading brand in the gaming and eSport world through the following four ways:

1. Sponsored Teams: Monster has infiltrated the eSport industry by sponsoring some of the top eSport organizations such as Natus Vincere, Team Liquid, Fnatic and Gen:G eSports. These sponsored teams promote their partnership with Monster by showcasing Monster's brand on their website, team jerseys and merchandise and on their social media profiles.

3. Sponsored Events: Monster partners with a number of major eSports events. In 2020, Monster sponsored every fourth major eSport event yet did not rank in the top 5 most popular sponsors in eSports in terms of % of total hours watched. Monster is ESL's Global partner, sponsoring 18 competitions within the ESL Pro Tour CS:GO, ESL Gaming’s Dota 2 properties, ESL One and Dream League Dota 2 leagues. In addition to their sponsored events with ESL, Monster will become the “first-ever global partner of the CS:GO HUB.

4. Game Partnerships: From Sep. '21 to Dec. '21, Monster is partnering with Apex Legends for limited time exclusives, including Apex Legend Monster products, in-game content, and a sweepstake of prizes. In addition, Monster and Apex legends have promoted the campaign with a Snapchat filter, organic social posts and paid social ads. From September to October 2021, the campaign landing page has had 1.4M web visits and averaged 22.2K visits a day.

From January to October 2021, Monster’s sports, gaming and music pages drove 230K web visits, which made up ~8.4% of its total web traffic (worldwide). Gaming makes up 63% of this traffic, followed by music and sports with 27% and 10%, respectively.

Monster’s gaming pages on its site have been steadily increasing in traffic, averaging 15.2K visits per month from Nov. ‘19 - Oct. ‘21.

Monster’s gaming strategy can be broken down into the following four categories:

‍
Starting in 2015, Monster has been sponsoring eSport teams and organizations.

Similar to Red Bull, Monster has infiltrated the eSport industry by sponsoring popular eSport organizations. In 2020 Monster and Red Bull both sponsored 4 of the 10 top eSport teams. Monster generated the most hours watched with 301M hours followed by Red Bull with 253M hours.

Monster’s first eSports partnership was with Evil Geniuses in 2015 and is still ongoing. Monster has been working to expand into other countries. Monster has the following 5 eSport teams listed on their website as official sponsored teams:

These five eSport sponsored teams have a combined total of 42.3M followers on Twitch. Team Liquid has the most followers with 22.5M as of November 2021.

The following are Alliance’s top ten players in terms of hours watched on Twitch:

The following are Evil Geniuses’ top ten players in terms of hours watched on Twitch:

The following are Fnatic’s top ten players in terms of hours watched on Twitch:

The following are Team Liquid’s top ten players in terms of hours watched on Twitch:

The following are Natus Vincere’s top ten players in terms of hours watched on Twitch:

Monster’s sponsored eSport Teams have a combined total of 3.6M followers on Instagram. Fnatic has the most Instagram followers with 1.2M and Natus Vincere has the highest engagement rate at 2.6%.

Natus Vincere has a significant following on YouTube with 1.2M subscribers. Monster’s Sponsored eSports teams have a total of 2.5M subscribers on YouTube.

Monster’s sponsored eSport teams promote their partnership by showcasing Monster’s brand on their:

Monster sponsors the following ten gaming video creators which are featured on their website:

Monster’s gaming streamers have a combined total of 3.8M followers on Twitch, and generate 2M hours watched* per month.

Monster’s sponsored gaming streamers have a combined total of 3.9M followers on Instagram. Sc0utOP has the most Instagram followers with 3.0M and snoxh has the highest engagement rate at 18.3%.

Monster uses their partnerships on Twitch to feature their branding on streamers’ profiles, in their about sections and in-stream with ad pop-ups and frames. Streamers often have a Monster-sponsored fridge or neon sign in their streaming room, and sometimes drink or mention Monster while on camera.

Monster's sponsored gamers on YouTube promote their partnership with the brand in the following four ways:

In addition to their sponsored events with ESL, Monster will become the “first-ever global partner of the CS:GO HUB, an analytics platform that helps teams and players develop their skills by providing in-depth data from their competitive and matchmaking games”*

Monster was the second most popular sponsor of CS:GO and Dota 2 events in terms of number of tournaments in 2020 but it did not rank in the top five when looking at sponsorship popularity based on hours watched.

1 in 4 eSport event was sponsored by Monster in 2020. Monster Energy sponsored more tournaments than Game Fuel, although Game Fuel had the second most hours watched next to Intel.

‍
From Sep. '21 to Dec. '21, Monster is partnering with Apex Legends for limited time exclusives, including Apex Legend Monster products, in-game content, and a sweepstake of prizes.

In September 2021, Monster announced its partnership with the battle royale-hero shooter game, Apex Legends. The partnership includes limited-edition Apex Legend cans available in the US from September - December 2021.

As part of the Apex Legends campaign, with the purchase of a Monster product, fans can earn in-game content and get entered into a sweepstake of prizes.

To support the Apex Legends campaign, Monster launched a landing page which explains how to gain the in-game content and participate in the sweepstake. From September to October 2021, the landing page had 1.4M web visits and averaged 22.2K visits a day.

The launch videos on Apex Legends social profiles had a total of 695K views and 107K engagements.

Additionally, on Twitch, Apex Legends features their partnership with Monster on their about section which links to the Monster website.

Since the campaign launched, Monster has spent $604K on digital ads promoting the partnership (9/01/2021-11/07/2021). Ads have predominantly been focused on Twitter which made up 61% of the campaign ad spend.

1. On September 1, 2021, Apex and Monster posted a campaign launch video which featured a render limited-edition can spinning and linked to the campaign landing page.

2. Monster created a series of videos featuring people playing Apex Legends and drinking Monster. The video has a CTA to visit the campaign landing page, which explains how the promotion works.

We've teamed up w/ @PlayApex to give you exclusive in-game content! It's easy to redeem. Here's how: Buy Monster. Upload your receipts. Earn & play.

3. Monster promotes their Apex Legends Snap lens by partnering with Monster Athlete, MMA fighter, Daniel Cormier. The ad uses a CTA to buy a Monster product to “join in on the fun”.

.@dc_mma is a fan of our @PlayApex Snap lens.

Buy any Monster and scan the can to join in on the fun. #RallyYourSquad

Monster ran the two campaign videos on YouTube and Twitch as 6 second and 15 second ads. Ads on Twitch performed better relative to YouTube with the average CPM being 60% less. Amongst the two video sharing platforms, Monster generated over 10M paid impressions in just over a month (09/01-11/07 2021).

On Facebook and Instagram, Monster ran the following two ads in support of their partnership with Apex Legends. One of the ads featured Monster’s “rare” Apex Legends banner frame which is exclusively available at the American fast food chain, White Castle. The other ad used the launch video creative, and had a CTA to “Shop Now” which took users to an Amazon link to purchase Monster products.