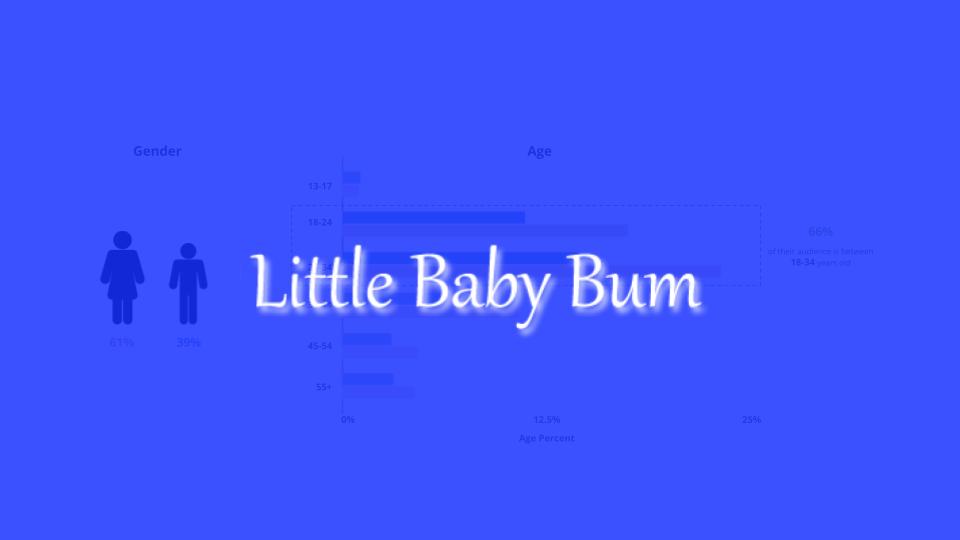 Focus On Long Form Content: Over the past several years, Little Baby Bum has slowly increased the length of their videos to an average of 35.6 minutes in 2020. 76% of 2020 video uploads were longer than 30 minutes which accounted for 58% of total 2020 video views. Of the videos greater than 30 minutes, 45% were between 30-35 minutes long. Though, videos longer than 60 minutes gained more views despite having a smaller number of uploads. These long form videos typically have a duration time stamp (e.g., “74 minutes”) in the thumbnail to give users a quick idea of how long they are.

Web Traffic Focus — Organic Search: Little Baby Bum derives the majority (84%) of their web traffic from Organic Search. Little Baby Bum does not do any Paid Search, Display Ads, or Social Media Ads to drive traffic to their website. For more information about LBB’s organic search strategy, please see this case study.
Overall, there is a huge whitespace opportunity as LBB is relying on SEO with zero advertising dollars spent on paid search, display advertising, and social media ads.‍

Organic Social Focus Allocation — YouTube & COPPA Regulations: Similar to CoComelon, LBB benefited largely from the YouTube COPPA regulations and launch of the YouTube Kids app. During this time period, LBB gained 1.4M subscribers which was the second largest growth of all time for LBB’s YouTube channel.‍

Content Focus Allocation — Video & Music Streaming Platforms: In recent years, Little Baby Bum has focused their efforts on getting into a variety of video & music streaming platforms such as Spotify, Apple Music, Netflix, Hulu, and Prime Video instead of spending on digital advertising, Little Baby Bum has made their content available on numerous platforms to help increase their brand awareness and introduce more use cases for their content. In 2019, Little Baby Bum received nearly 1M Spotify listeners and 51M streams.

On YouTube, Little Baby Bum’s (LBB) audience skews female, with 66% of the audience concentrated between the ages of 18-34. This age concentration is most likely representative of parents and siblings whose devices are being used to access the content.

LBB’s YouTube audience is primarily concentrated in the United States (55%), followed by the UK (5%) and the Philippines (3%). African countries such as South Africa, Kenya, & Nigeria make up <2% of CoComelon’s audience.

LBB’s Instagram audience is primarily concentrated in the US (48%), followed by Brazil and the UK. Similar to YouTube, on Instagram African countries such as Nigeria, South Africa, & Ghana make up <2% of LBB’s audience.

On Instagram, only 11% of LBB’s US audience is of African American descent.

Little Baby Bum’s YouTube views peaked in October of 2019 when YouTube launched YouTube Kids due to new COPPA regulations. A second larger spike was seen in April 2020 during the pandemic, increasing +357% YoY for the period of January to May.

In the last nine years, Little Baby Bum’s average video duration* has steadily increased to an average of 35.6 minutes in 2020.

From Jan. to Dec. of 2020, Little Baby Bum’s web traffic decreased significantly by -96%. This reduction in web traffic is most notably seen in Mobile traffic which decreased by -97% in the same period, with the largest decrease occurring in May.

Little Baby Bum’s main marketing channel is Organic Search, with notable traffic from Direct and Social (YouTube) as well. LBB does not do any Paid Search, Display Ads, or Social Media ads to drive traffic to their site.

Since 2014, Little Baby Bum has experienced an average growth of 5.5M new subscribers a year. The largest growth was seen in 2020 with 51% YoY growth & 11.7M new subscribers.

Looking at the past three years, Little Baby Bum saw a large spike in subscribers in October of 2019 (+1.4M) around the time that YouTube Kids was launched, with a second spike in April of 2020 (+1.7M) during the height of COVID-19 lockdowns.

Subscriber growth has dropped off from the April 2020 high to an average of 580K subscribers per month (from August to December 2020), which is still an increase of +138% YoY.

Little Baby Bum has also focused their efforts on getting into various streaming networks such as Netflix and Hulu for additional exposure and brand awareness.

Little Baby Bum also offers their nursery rhymes & music on music streaming platforms such as Spotify, Apple Music, Amazon Music, and iTunes which can be used for kids when driving or at home. In 2019, LBB’s Spotify had nearly 1 million listeners and 51 million streams.

On Instagram, Little Baby Bum’s core focus is on engagement which they promote through the use of questions in their captions. Their feed mostly contains image posts and they do not repost their YouTube videos on Instagram.

On Facebook, there is more of a focus on sharing video content, with Little Baby Bum compiling playlists and video series full of their nursery rhyme & animated series videos to keep kids entertained for longer.