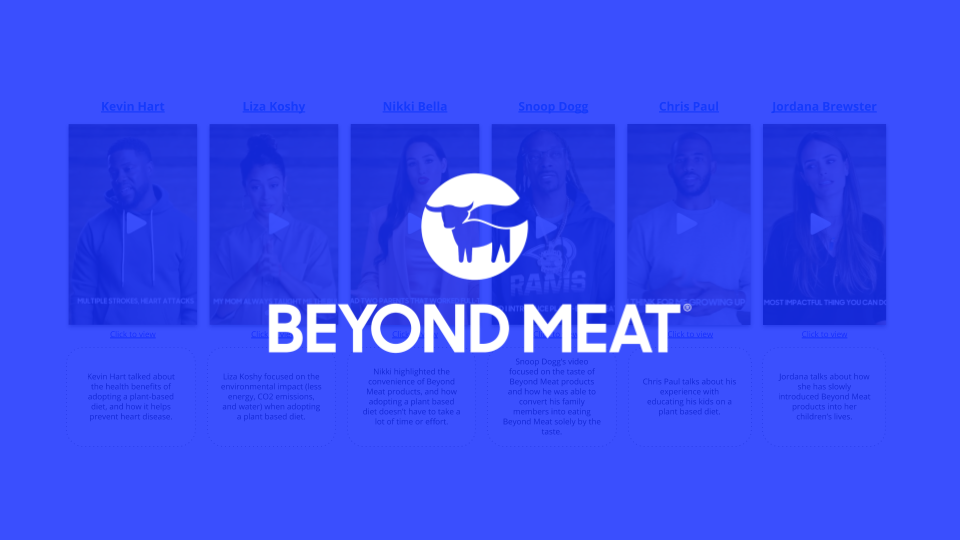 Leveraging Influencers to Promote a Plant Based Diet

From the Leveraging Influencers to Promote a Plant-Based Diet Case Study:

Paid Social Focus — YouTube & the USA: 98% of Beyond Meat’s advertising dollars are being allocated to the US region, in 2020 Beyond Meat only spent $5.6K for the Canadian region. In the US, Beyond Meat is focusing their advertising efforts on YouTube, with a total spend of $136K in 2020. Instagram is another area of focus - since June, Beyond Meat has steadily spent $13K per month on Instagram ads for the remainder of the year.

Paid Social Tactic — Use Platform-Specific Formats to Promote Campaigns: Beyond Meat partnered with several influencers to promote their plant-based products and to talk about their experiences with plant-based diets. On YouTube, Beyond Meat partnered with Liza Koshy and released several short video clips that focused on showing off the product in-use. On Instagram, the company made even shorter clips turned them into stories and feed posts, this time focusing solely on the influencer and their journey. A large difference is the inclusion of subtitles, which allows audiences who may be viewing their content on-the-go, in public areas, or without headphones to still absorb the information.

Paid Social Tactic — Target Social Ads to Specific Locations: Beyond Meat knows where their primary audience resides and their social ad spend targeting reflects that. With both Facebook and Instagram, there is a clear pattern of where they allocate their budget to: their primary audience focus lies mainly in the west coast (California) and south-west region (Florida and Illinois). Rather than spending large amounts of money and targeting the entire country, Beyond Meat is selective in where they advertise, with some states (particularly the more northern states) receiving no advertising.

Beyond Meat spends the majority of their advertising dollars on the United States, with only a $5.6K spend for the entire year of 2020 in Canada.

In the US, Beyond Meat focuses their advertising efforts on YouTube, with a total spend of $136K for the year 2020.

In June, Beyond Meat started advertising on Instagram, and then has steadily spent $13K per month on Instagram ads for the remainder of the year.

Early in 2020, Beyond Meat partnered with influencer Liza Koshy for their YouTube campaign, where she spoke about the environmental impacts of a plant-based diet.

Liza Koshy is an official Beyond Ambassador and has appeared in various other Beyond Meat advertisement videos (example 1, 2).

Environmental impact is a huge part of the campaign, Liza talks about how it takes less water and C02 emissions to produce Beyond Meat products.

On Instagram, Beyond Meat worked with 6 influencers and celebrities in total, who each shared their own story about adopting a plant-based diet.

Of the six story features, Beyond Meat spent just over $26K to convert two of the stories as sponsored feed ads. Spending on these feed ads totaled to 46% the brand’s total Instagram ad spend in 2020.

Another priority for Beyond Meat is communicating their online delivery services, which has been especially important due to the COVID-19 pandemic.

On Instagram, Beyond Meats primarily targets audiences located in California and Florida, with 33% of their ad spend allocated to those two states.

On Facebook, the top campaign focused on their partnership with Hardee’s, where Hardee’s launched the Beyond Spicy BBQ Cheeseburger.

On Facebook, Beyond Meats primarily targets audiences located in Florida and Illinois, with 30% of their ad spend allocated to those two states.

Display advertising spend is extremely low for Beyond Meats, with a total budget of just under $10K for the entire year of 2020.

100% of Beyond Meat’s display advertising budget was spent on amazon.com and it came in the form of one display ad.