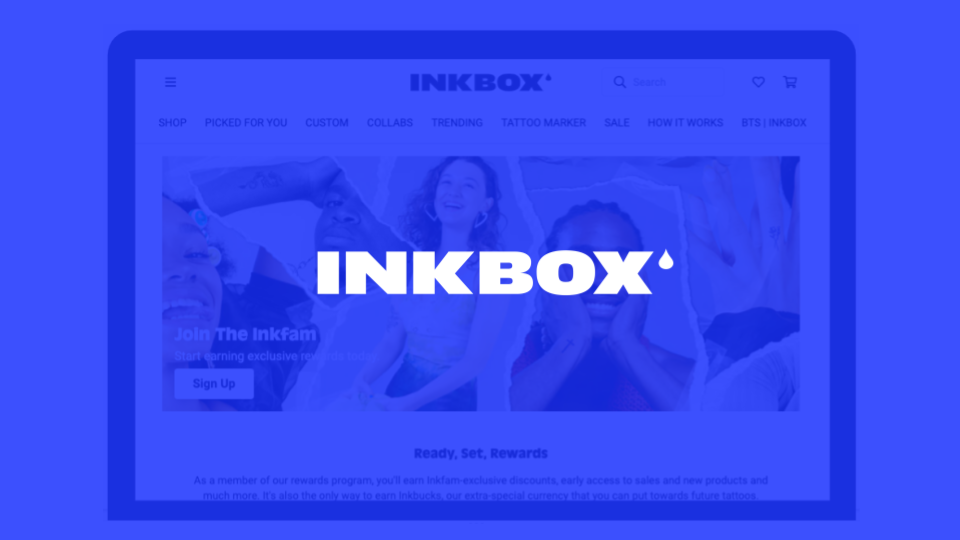 Inkbox, a Canadian temporary tattoo vendor, built a reward program “Inkfam” that was launched in 2017. It has developed overtime generating 8K monthly website visits and 90K total visits from October 2020 to August 2021.

Building a Conversion Based Reward Program:

The Inkbox reward program “Inkfam” was launched in 2017 and has developed overtime generating an average of 8K monthly landing page visits and a total of 90K visits from October 2020 to August 2021.

‍Inkfam Launch (2017). When Inkfam launched in 2017, a tier system was implemented called “chapters” where customers could level up by reaching different points based on their spends. Points could be redeemed across a range of offers such as:

Inkfam Update (2019). In 2019, the majority of ways to earn points included incentives that encouraged the growth of off-page elements such as social media. Customers could increase their points by following and sharing the business across social media networks allowing Inkbox to see a +26% increase in Instagram followers throughout 2019. Redeeming points was limited to a basic dollar amount or percentage off an order.

In 2021, the reward program page was updated to only include earnings through purchases with more specific and limited ways to redeem points.

Brand Building & Familiarity. Inkbox has used branded terms across their reward program since 2017 to help customers identify and associate their purchases with the brand.

Simple & Beneficial. Since launching in 2017, the latest version of Inkfam in August 2021 focuses on a simple system compared to its original iterations. The current reward tiers focus specifically on-site with a push towards selling. All the rewards that can be unlocked benefit conversion optimization for abandoned carts or repeat purchases. Inkbox is able to build customer loyalty and lifetime value over time as all purchases directly benefit the customer.

Post-sign up, Inkfam members can easily track their progress and inkbucks in their rewards account on the website. Inkbuck balances are listed in the top right corner of a user’s browser.

Rewards Sign Up Email. As of 2021, Inkbox isn’t promoting their reward program externally on social media or paid ads often and it remains internal to the site. The only cross-channel integration with the rewards program is a newsletter that is sent out immediately after signing up. To encourage subscribers to make their first purchase right away, an introductory discount is offered for 20% but it must be used within 24 hours.