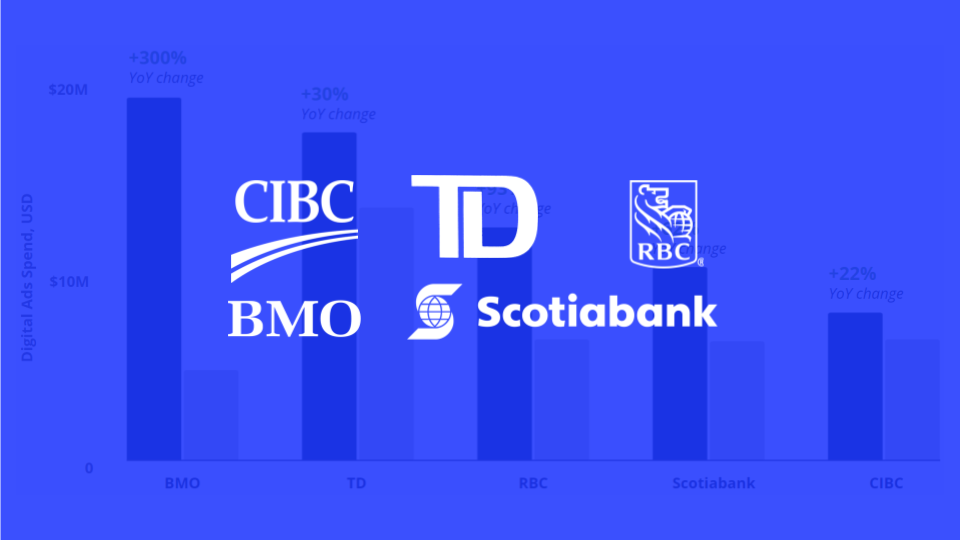 Digital Spend — Financial Industry Saw a Growth in Digital Advertising Spend. During the first six months of 2021, Canadian Financial Industry players spent +34% more on digital advertising than during the same period last year. While the investment has increased by +34%, financial companies saw only a +13% increase in impressions. Big 5 Canadian banks account for 43% of all financial industry digital spending. In monetary terms, this translates to $66M, which is 78% more compared to Q1 – Q2 2020.

Budget Allocation — Facebook is the Preferred Advertising Channel for the Financial Industry in Canada. Facebook received 54% of the total Q1-Q2 2021 digital advertising spend, which translates to $85M ($60M in Q1-Q2 2020). YouTube was the second most preferred advertising channel for financial services players in Canada. During the first six months of 2021, financial companies spent $31M to run video ads, which is 244% more than during the same period last year. Desktop display ads received 70% less advertising dollars in 2021 than in 2020, pushing this channel down to third place.

Capital One was the top spender after Big 5 Banks with $6.5M invested in digital ads. 4 new companies entered the top 15 digital spend spenders in 2021.

Canadian Financial Industry players invested more than half (54%) of all advertising dollars were in Facebook, followed by YouTube (20%).

Big 5 banks spending was very much in line with overall industry budget distribution — 58% of all advertising dollars were invested in Facebook and 28% in YouTube.

The top Facebook ad (by spend) was run by Scotiabank, the bank invested $1.7M in the ad educating its target audience about RRSP.

Wealthsimple aired the top desktop display ad. The banner ad backed up by a $385K investment invited Canadians to file their taxes with Wealthsimple Taxes.