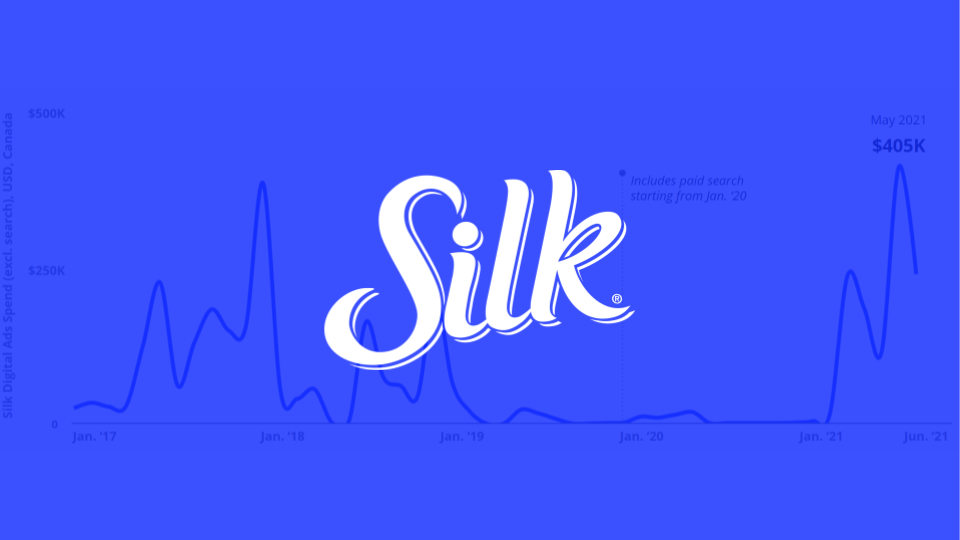 Silk Canada aggressively tapped into paid advertising in the first two quarters of 2021. In May alone, the company spent $406K to run paid advertising. When it comes to ad formats, Silk opted for short 15-second brand awareness videos. The company focused on uplifting brand awareness rather than advertising specific SKUs. $1M dollars was invested in general brand ads, while the remaining $159K was allocated to support specific products.

Budget Distribution — Silk Invested 73% of its Advertising Dollars into YouTube. The brand allocated $957,265 to the YouTube platform, which was split between two 15-second video creatives. 90% of the budget supported the desktop distribution of these videos.

Budget Distribution  — Silk Spent $192K to Run Product-Focused Ads on Facebook. The brand deployed a different strategy on Facebook – Silk double-downed on short videos promoting specific products rather than investing in general brand recognition. The company allocated $66K to promote its new Almond & Cashew high-protein milk, as well as oat milk ($16K) and oat yogurt ($14K). It’s worth mentioning that that Silk didn’t run any Instagram ads during the first two quarters of 2021.

Silk significantly increased its digital advertising spending in 2021 after two years of minimal investments in digital ads. In the first 2 quarters of 2021 Silk Canada spent $1.2M on digital ads.

In May 2021, Silk Canada invested $406K in digital ads — the highest amount the brand spent on paid ads in the last fours years.

Silk split its $957K YouTube budget between two 15-second ads aimed to drive brand awareness rather than focusing on a specific product.

When it comes to the geographical budget distribution, Silk ran most of its ads in the metropolitan cities — 12% of the ads targeted audience in Toronto, with both Montreal and Vancouver getting 9%

For its display ads, Silk leveraged the same 15-second videos as on YouTube, distributing them on news, Walmart and cooking websites.

Overall during Q1-Q2, Silk chose to invest 73% of its total paid advertising budget to drive general brand name awareness. The remaining part of the budget was spent on supporting the following products: